Plenary Hall of the German Parliament

Built between 1884 and 1894, the Reichstag building for the German Parliament was renovated from 1995 to 1999. The architect behind its transformation was Lord Norman Foster.

The reconstruction work began at the end of July 1995, directly after the end of the episode of the “Wrapped Reichstag”.  The first step was to remove the reconstruction work undertaken by Baumgarten in the 1960s.  This resulted in the removal of 45,000 tonnes of rubble and debris.  To ensure the stability of the modified structure, the building was supported by 90 new additional support props, in addition to the 2,300 which Paul Wallot had installed in the underground of the original structure.

The preliminary building works began in July 1996.  In the core of the building, a new structure was created within the shell of the old construction.  It comprises primarily the plenary hall which covers all three main floors.  The plenary hall and the representative staircase are fitted with polished Obernkirchener Sandstein®. 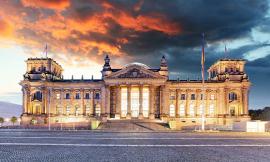 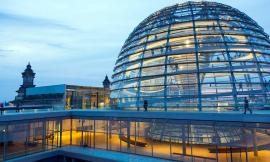 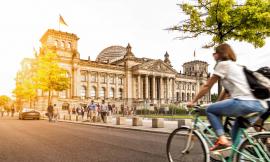