The Gothic Ulm Minster is the main church of the former Free Imperial City of Ulm.  With its steeple measuring 161.53 m, it is the tallest church in the world. The Minster, like Cologne Cathedral, belongs to the group of German Gothic churches which were only completed at the end of the 18th century.  Originally a Catholic church, the Minster became the largest Protestant church in the world after the introduction of the Reformation in Ulm (the citizens voted for the Reformation in a referendum in 1530).  For centuries, the Ulm Minster remained in the possession of the city of Ulm.  It was only in 1894 that the ownership of the Minster was transferred from the city to the parish of the Protestant church in Ulm.

The second phase of construction took part between 1844 and 1890. The master builder up to 1870 was Ferdinand Thrän and, following that, Ludwig Scheu from 1871 - 1880. In 1880, architectural conservation measures were required before work on the completion of the main and West towers could begin in 1885. From 1896, Obernkirchener Sandstein® was used for the expansion of the two choirs and for the finer stone work.  This work was completed on 31 May 1890 after the finial was placed, giving the Minster its present distinctive appearance. This section was completed under the supervision of August von Beyer.

I hereby certify that  fine grained hard sandstone from the quarries at Obernkirchen was been used for the expansion of the main steeple of Ulm Minster. It is predominantly used for finer work on the exterior of the building, as well for areas which are particularly exposed to the weather. The choice to use Obernkirchener Sandstein was made after detailed inquiries and investigations undertaken at my request  regarding this stone’s compressive strength and durability against the elements, which revealed it as one of the prime sandstones available. All deliveries to date have been to our full satisfaction. 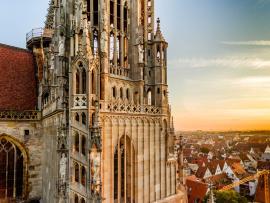 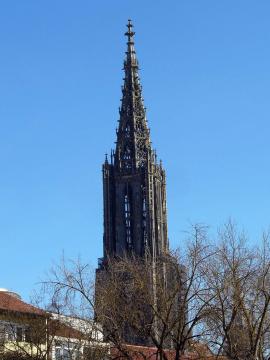 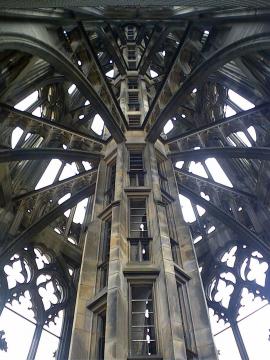 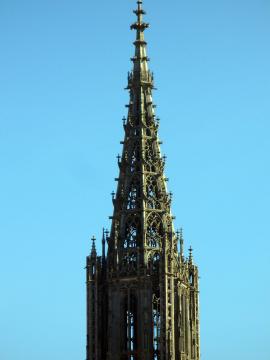